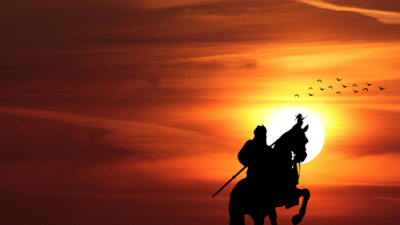 Today is the day of 18 June 1576. Now the rays of the sun have touched Haldighati. Something is going to happen in this yellow valley that will be recorded in the pages of history and will always be remembered.

Maharana Pratap with his army of 3000 is coming to battle the Mughal Emperor Akbar's 5000 army.

It is morning and the month of June. Raining of fire from the sky is starting.

Today Maharana Pratap's might is seen differently. 80 kg spear in his hand, 72 kg his armor, 110 kg his weight, 7 feet 5 inches his length, Maharana Pratap is riding on his horse Chetak.

An elephant's mask is placed on the mouth of Maharana Pratap's horse. For this reason, elephant considers horse as elephant.

Suddenly the sounds of the sword and spear echo in the valley.

The war is so fierce that Haldighati's color turned red in a short time.

Maharana Pratap mounted his horse on the trunk of the elephant of Mansingh, and attacked him with a fierce spear. 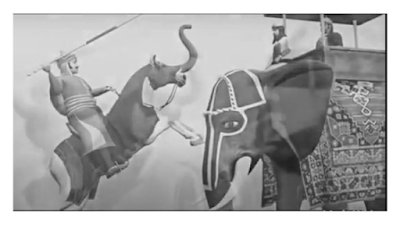 Mansingh survives in this fierce attack, but his mahout is killed.

As soon as Maharana Pratap brings his horse down from the elephant, the sword in the trunk of the elephant injures Chetak's leg.

Enemy soldiers start attacking from all sides and Maharana Pratap is injured.
Maharana Pratap's companions come and force him to leave from there.

Now Chetak runs with injured leg for 5 km taking Maharana Pratap. A 26 feet wide drain comes in front of him.

As Chetak leaped and crossed the drain. Chetak said goodbye to the world forever.

The sound of horses coming from behind. As Maharana Pratap looked back. Then he sees that his brother Shakti Singh is following him. Which is included in the army of enemies.

Now the sound of horses coming from behind. As Maharana Pratap looked back. Then he sees that his brother Shakti Singh is following him. He is in the army of enemies.

The great warrior of Maharana Pratap was killed in this war.

After the war, Akbar's army was afraid of even light sound.

This was all due to Maharana Pratap's heroism.