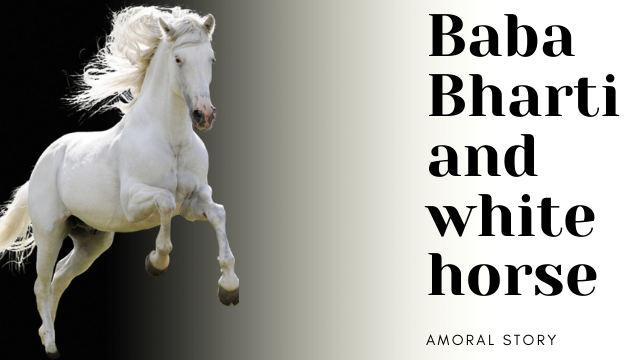 This is the story of Baba Bharti, who loved his horse. He loved the horse so much that when he did not see the horse, he became restless.

His horse was white like a goose and there was a distinct glow when going in the sun. The black long-haired Baba Bharati, who used to walk on his horse, forgot the whole world.

Baba Bharti's very beautiful house in which he had made a beautiful Stables. he used to sleep in front of it. Many times when Baba Bharati's eyes opened on the night, his horse used to go to see the horse immediately.

His horse was well-known. One day a person came to see the horse. Baba Bharati showed him his horse. The person liked the horse very much. The person said to Baba Bharti, ''I will take your horse from here tomorrow'' and he goes away.

Now a fear arose in the mind of Baba Bharti. His restlessness began to increase.

When Baba Bharti went to ride the horse in the evening, this fear kept coming in his mind again and again.

Now Baba Bharti returned home and he tied his horse in the stables, Now the night was slowly falling. Baba Bharti did not even eat food today.

He was Seeing his horse again and again. In this way, the night started growing but Baba Bharati could not sleep.

Even if there was a slight sound, restlessness would increase. In this way, all night passed restlessly.

Got up in the morning to feed the horse, the fear started increasing in the afternoon, the eyes did not move away from the horse.

It was now evening, Baba Bharati rode a horse and walked on the road. A crippled man shouted, help me. Baba Bharati stopped his horse and asked the person where do you want to go?

He handicapped started saying that my village is ahead. Please leave me there. Baba Bharati got down from the horse and seat the person on the horse with his hands.

As soon as the person sitting on the horse, he caught the rein and ran away with the horse.

Baba Bharti felt as if his world had become desolate. His body had become insensible for some moments.

Now Baba Bharti still shouted, "Do did not cheat anyone by making handicapped otherwise people will not helping such people."


Now Baba Bharti's horse was flying in the direction of the sun before his eyes, like a swan.

Baba Bharti was staring at him, Baba Bharti's eyes filled with water and the horse disappeared from his eyes.

Baba Bharti slowly stepped towards the house. Now there was no anxiety in his mind nor was there any worry.

He came to his house and laid a mat on the earth and lay down, today there was no concern in his mind. There was no pain. He took off his turban and slowly went to deep sleep.

Moral of the story:

"Do did not cheat anyone by making handicapped otherwise people will not helping such people."